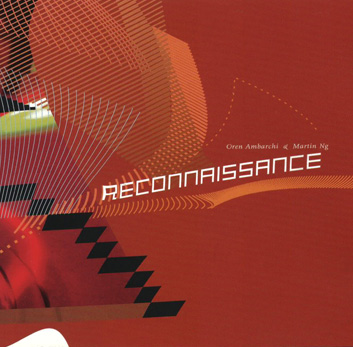 "Reconnaissance" is the first duo release by Australian composers Oren Ambarchi and Martin Ng from Sydney - a trilogy of pieces based upon the fluid architectural modulation of harmonics and resonances. Recalling the landmark experiments of the Sonic Arts Union (Robert Ashley, David Behrman, Alvin Lucier and Gordon Mumma), Ambarchi and Ng create an enigmatic tapestry of pulsing, shimmering and shifting sound which represents a subtle and compelling realignment of Eastern and Western minimalist traditions.

“There is an aura of nostalgia surrounding Oren Ambarchi and Martin Ng's ‘Reconnaissance’. The analog electronics, stripped-down aesthetics, and the lines and geometrical shapes in Tina Frank's artwork are taken right out of the early days of minimalism and sound art (especially Alvin Lucier). Ng's analog tones and Ambarchi's guitar are literally fused together. Only after the most attentive listen (and the willingness to take chances) will one be able to ascertain who produced what sounds. Harmonies and resonances are the heart of this cd. Tones delicately echo off one another, creating cold but pleasant soundscapes. (…) Ever heard a guitar that sounds like finger cymbals? This one is very peaceful, totally Zen. (…)

Many artists with or without electronic backgrounds have tried similar things, but rarely have they created a piece that is an object of such plastic beauty, such raw postmodern aestheticism. Every musical gesture counts in this endeavor structured around the repetition of a very limited number of moves. ‘Reconnaissance’ (…) shows impeccable taste and an uncanny courage to do less. Recommended.” (François Couture, All Music Guide)