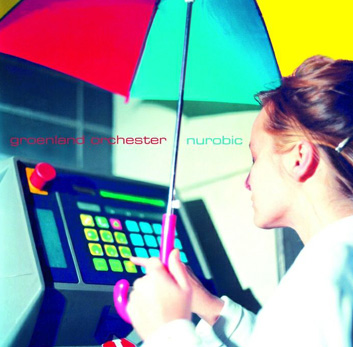 “A goofy, circuslike and chompy bumpy ride of goofy electro, but one that's neither over-the-top nor kitschy. The Orchester's instrumentals teem with buzzing and artificial pipe-organ noises, the sounds of insects moving their legs really fast. Tracks are melodic but distracted; melodies wander and rarely return to a riff or 'chorus'. Drum machines contrast/coexist with keyboards, each revolving in their own hyper circle of sound. Ping, pong, bing, 36 minutes, eight tracks of fun without being 'ha-ha'. Supposedly created by a group that can swell up to 40 members but I am quite skeptical on that account. This is their second album.” (Other Music)

Founded in 1998, the Groenland Orchester produces electronic pop music of a special quality, cleverly avoiding the aesthetic traps of common dance music. The duo's background in sound experimentation is obvious, but there's always room enough for simple and sweet melodies.

The orchestra's conductors are Reznicek (aka Reznicek, Nova Huta) and Jyrgen Hall (aka Gunter Adler). Reznicek (programming, orchestration, electric guitar) is already well-known for his experimental solo releases (on Staubgold, Odd Size, Wachsender Prozess and Meeuw Muzak), for his collaborations with Klangkrieg and Felix Kubin and for his "Las Vegas Show" with artist and painter Mariola Brillowska. Jyrgen Hall (programming, transfer, bass guitar) is a specialist for psycho-acoustics and psycho-physics.