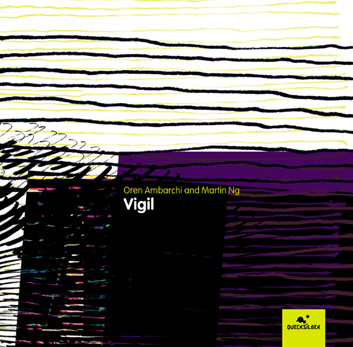 "Vigil" is the second duo album by Australian composers Oren Ambarchi and Martin Ng from Sydney after 2001's "Reconnaissance" on the Staubgold label. It's a dreamlike sonic excursion based upon the fluid architectural modulation of harmonics and resonances. Recalling the landmark experiments of the Sonic Arts Union (Robert Ashley, David Behrman, Alvin Lucier and Gordon Mumma), Ambarchi and Ng create an enigmatic tapestry of pulsing, shimmering and shifting sound which represents a subtle and compelling realignment of Eastern and Western minimalist traditions.

Austrian designer Tina Frank of Mego has added two short films in MPEG format to this release which in its slow and subtle moves match perfectly with the fragile beauty of Ambarchi's and Ng's music.