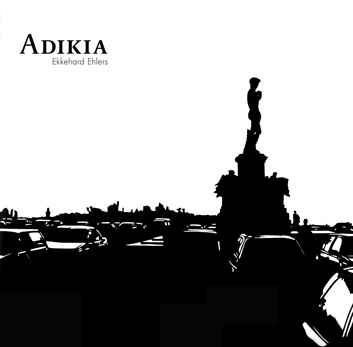 Adikia is phenomenal, a scattered, moving dissembling of a moment. With music like this, there seems to be an obvious marriage between composition and improvisation, where the composer creates a set of moments, or rules, or an environment within which each musician is free to fill spaces accordingly. This group does this masterfully, which is to be expected. Alongside longtime favorites, like Kai Fagaschinski (clarinet), Werner Dafeldecker (double bass), and Paul Wirkus (percussion), are revelations, like Eva Reiter (viola di gamba, subcontrabass recorder) and Bjorn Gottstein (viola). Todosch's performance on voice, especially, is flooring. Whatever Ehlers set in front of each of these musicians, each brought ample personality and a mastery of their moment.

Adikia has twin structures, at least initially. Each moment leads to the next, free of signposts but pregnant with a growing sense of unified direction, of pattern. Imagine, if you will, a slow motion film in reverse, which starts with a shattered window, the spider webs stretching from side to side, small, jagged holes in the glass. From this brief still comes motion... the catalyst for this destruction enters the frame, a bullet moving steadily backwards, returning into the glass, spider webs receding to their points of origin, air pulled back into the cabin until the glass is once more whole, capable of reflection, transparency. These twin beginnings are the instinctual understanding of the geometry of such an impact. Once we see the bullet, we see the impact forwards and backwards, we can trace the relationships of lines to lines.

This is how sound works in Ehlers' work. These pieces don't build so much as reconstitute themselves. Each half of this piece ends where it began. There is no slow scaling, there is no ascent. There is only retracing steps, a move towards an indentation in the ground from which someone, or something, lifted off, only to suddenly scatter.

The first half's conclusion is stunning. Its understated rejection of a cathartic finish also eschews the strict aversion to melody so common to works stitched together from aural ennui. Melody, dour, bitter, perhaps mournful, pours out from the speakers. Each line feeds an ear eager for tone, texture, and consistency. Much as our eyes dilate in the dark to savor what little light there may be, only to blind us with a normal dose, so too do the spare proceedings make our ears, and emotions, overly receptive to melodic saturation. The strings sing, every rub of the bow evokes frantically dispersed dust, and pressed fingers, and sadness.

As quickly as this song appears, it disappears into the piece's second half. Yet something remains, both in the retained perception of emotion in the listener, but also structurally. The second half of Adikia more readily provides low-end swell. The sound spectrum is fuller, the strings and bass provide a floor... it could be, just as the first half’s beginning is a post mortem on its origin, the second half is a fuller realization of what is to become the first half. While the structure is similar, there is a more palpable sense of aggression from the ensemble. Sounds come and go, but the first half has alerted the listener to a potential second burst, and that burst does come.