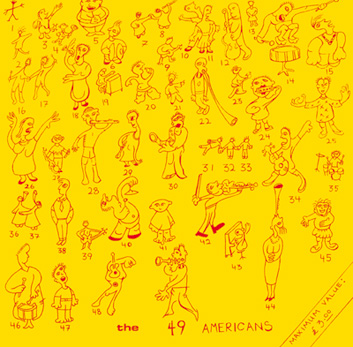 Long-awaited reissue of the first full-length album from 1980 by late 70s/early 80s UK DIY super group The 49 Americans. The main instigator behind The 49 Americans was Andrew "Giblet" Brenner who assembled a loose, disparate group of musical/non-musical practitioners as an experiment in equality and democracy. This democracy included David Toop, Steve Beresford, Max Eastley, Lol Coxhill and Peter Cusack (coming out of the anything goes improv scene), Nag and Bendle of The Door And The Window, Viv Albertine of the Slits, Vivien Goldman (her Adrian Sherwoood/John Lydon produced Dirty Washing 12" on 99 Records is a classic), Giblet's mum and many more. "Think of The 49 Americans as a band, in the conventional sense, and you're lost." (David Toop)

By the first LP (after "The 14-Track Single" in 1979) the sound of "The 49 Americans" evolved into an off-kilter songwriting style similar to that of Maher Shalal Hash Baz, Red Crayola and early Beat Happening. “Some of my favourite sessions were the early ones - just me, Andrew and Else, playing a song like 'Beat Up Russians', Else playing saucepans from my kitchen and the Sony cassette sitting there on the floor next to us. Else had a certain sensibility that you can't replicate. Her, me and Steve playing in our Chic mode could sound surprisingly tight, yet the feel was still peculiar." (David Toop)