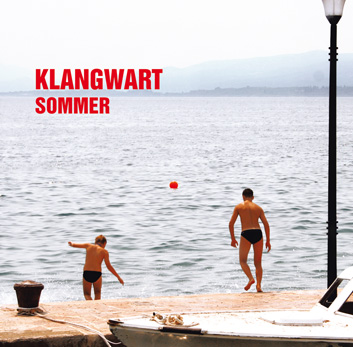 Markus Detmer (Staubgold) and Timo Reuber (Reuber) have recently become aware of two facts: a) that they have known each other for the past 18 years and b) that during 14 of those, they have been making music under the name of Klangwart. Looking back at all those years, they reckoned it was time to put together a retrospective from their extensive archive. They quickly decided that the motto of this compilation was to be "summer" – light, warmth and recreation, but also heat, sweat and adventure. "Sommer" (staubgold 99 cd/dl/lp) assembles new as well as rarely heard tracks from those past 14 years – rarely heard compilation tracks and remixes for other artists as well as hitherto unreleased studio recordings which were recorded at the Inkiek studio in Cologne in 2008 and 2009.

A real-time improvisation. Deep trust and a profound understanding between the two musicians enables them to communicate without words. A tense groove propels us and them into unknown territory.

A snapshot of complex and interfering sensory perception. Tenderly mechanical harmonies guide the listener through a jungle of sounds.

Narrow streets, tall buildings, shimmering heat. The claustrophobic cityscape grows and sprawls socio-architectural tumour. You have to scream in order to get heard. The moloch strains your nerves and drains your energy. With your soul wounded you leave the city behind.

At the train station – a stop over between the worlds. Your mind is a hundred kilometres ahead – or behind. The rest is just waiting.

You are jumping with your backside into the face of destiny. A meeting of sounds and voices from all over the world. The soundlines weave themselves into a giant net, which blissfully tries to catch the summer. And then there's the big wave.

Sunrise. Clear and pure, fresh and new. The beginning of a long and beautiful day. Everything's going to change.

The world's in flux. Power lies in silence.