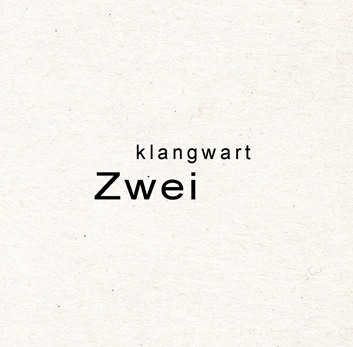 On occasion of the release of the new Klangwart album "Sommer" (staubgold 99) Staubgold presents a re-issue of the legendary second Klangwart album "Zwei" ("Two"), originally released on the group's own Klangstelle label in 1999. It is strictly limited to 200 copies in clear vinyl with the original artwork.

"Both 'Zweitoneins' and 'Zweitonzwei' are powerful drone pieces. In the first, a single tone bends and wavers like an airfoil caught in a relentless monochord cross-current. A grand ascent into the airstream caps 17 minutes of adamantly grounded variations in aerodynamic drag and lift. Imagine Tony Conrad bowing one viola note so aggressively as to achieve lift-off. The shimmering flux of 'Zweitonzwei' is far less assertive – an aurora of diaphanous haze that gathers, hovers, and dissipates within the undefiled acoustic space shared by Jliat, Organum, and Harry Bertoia." (Gil Gershman)