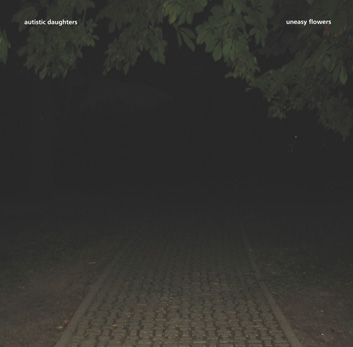 "Uneasy Flowers" is the second album by Autistic Daughters, the intercontinental trio of Dean Roberts (guitar, vocals), Martin Brandlmayr (percussion, computer) and Werner Dafeldecker (guitar, bass). It is also the fourth in a series of records in which Roberts, having begun in more abstract territory in New Zealand's mid-1990s 'free noise' ferment, has embraced song, lyric and voice as vessels for topographic and psychoanalytic tracings of the impacts of territory and nomadism on the subject.

This is reflected by the shape-shifting nature of the outfit: while Autistic Daughters, whose name comes from a lyric from their first record "Jealousy And Diamond" (staubgold 56 lp), are resolutely a trio, they also work in cinematic format, with ancillary players – in this instance, Chris Abrahams of The Necks, Martin Siewert and Valerio Tricoli – as part of both cast and crew, foley artists behind the trio's complex, worm-turning arrangements.

With "Uneasy Flowers", Roberts traces the internal and external workings of one protagonist: or, rather, a protagonist who 'contains multitudes', a figure that dissolves the unified self. Rather, this character, Rehana, embodies multiplicity and fragmentation in order to both a) address loss and b) aim toward transfiguration, transcendence. There are traces in the lyrics – traces of addiction and desire, myth and transformation - that are obliquely reflected in the music’s structure, its uneasy tension between the pop song (the 'moment') and experiment (the 'process').