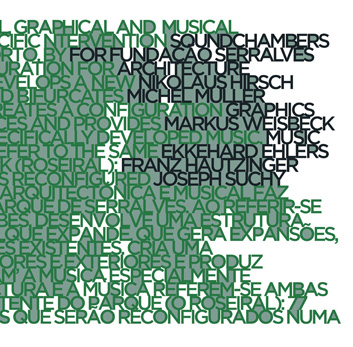 Well-known improvisers Ekkehard Ehlers (laptop), Joseph Suchy (guitar) and Franz Hautzinger (trumpet) team up for a supertrio of broken pop ambient. While on the one hand providing a state-of-the-art sound aesthetic, "Soundchambers" will on the other hand also appeal to friends of the music that Brian Eno and trumpeter Jon Hassell created in the mid-70s.

“On ‘Soundchambers’, this crew of German abstractionists locks together to form a constantly shifting musical triangle. Each of these five tracks is continually in flux, as Ehlers switches between melodic plinks and subterranean noise (his sources are piano samples by Adam Butler [aka Vert] and recordings of boiler rooms), Suchy transmits his far-flung psychedelia, and Hautzinger adds an earthy moan. It's like watching an amoebic blob expanding and contracting on a glass slide. (…) For all its sputtering noises and relentless sense of movement, ‘Soundchambers’ is surprisingly accessible. (…) The album never fades into the background or becomes fatiguing. An excellent record that's loud like nature with enough structure to appeal to non-musicians.” (Mark Richardson, Pitchfork Media)

Joseph Suchy has collaborated with artists like David Grubbs, Ekkehard Ehlers, Niobe and FX Randomiz, he is a permanent member of Burnt Friedman's Nu Dub Players and was one of the founders of Cologne-based cult-improv-label Grob. Suchy composes music for theatre, and has released three solo albums.

Trumpet player Franz Hautzinger is a globetrotter whose unmistakeable musical signature is known from Vienna to Berlin, London to Beirut, or in Tokyo, New York, and Chicago. He has shown that even in times where postmodernism is history an instrument can still be reinvented.