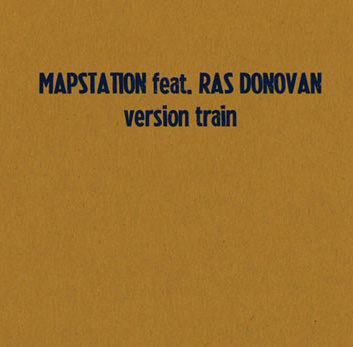 Version Train is the latest excursion from the consistently engaging Mapstation, featuring some beautiful new pieces and a couple of abstractions / developments from the previous set, "A Way To Find The Day" (staubgold 29, 2002). These cuts, "Wake Up" and "Gravity", are wryly cited as "versions" (in the Jamaican tradition), and in particular show off the understanding that the main collaborators, Stefan Schneider and Ras Donovan, now have for the drift of this music: creating pretty patterns, then breaking them up, moving forward as one, and then contradicting each other.

On "Be True" we hear Donovan sounding at his sweetest, tossing off his lines like it's a super-warm Jamaican production with a gorgeous melodic base, instead of Schneider's rather colder North European design. Other times the roles reverse, and we remember Schneider's role in To Rococo Rot is usually to bring the melody. "Version Train" also introduces two new elements to the Mapstation equation: DJ singer, Scallo, from Donovan's group (both also perform live with Tikiman), and Martin Brandlmayr from Vienna-based unit, Radian.