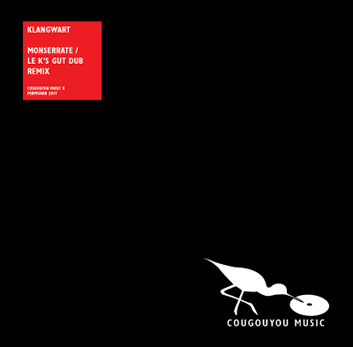 In 2014 Cologne/Perpignan duo Klangwart travelled to Bogotà for a recording session with prolific Colombian group Meridian Brothers. "Monserrate“ is the first track from those sessions to be released - a collective composition by Markus Detmer and Timo Reuber with Juanita Añez Rothmann (voice), Valentina Añez Rothmann (voice), Eblis Álvarez (cello), Damián Ponce (drums) and César Quevedo (bass). Features a fine remix by Perpignan’s dub master Le K aka Sylvain Garcia on flipside.
Since 20 years now electronic duo Klangwart occupy self-confidently their very own niche between Avantgarde and Pop. Markus Detmer and Timo Reuber, the two 'elder statesmen' of neo-Krautrock, are since regarded as the most authentic heirs to the psychedelic sound gurus of the '70s.
Linked to our record store of the same name in Perpignan in the deep South of France, Cougouyou Music has a focus on the local scene in Northern and Southern Catalonia.